Why The Compass IPO Will Be Successful

This week, Compass announced its IPO.

The timing looks near perfect with a strong real estate market and a robust IPO market. The company has hired the best bankers, beefed up its management team and will likely show its best year ever in its 2020 financial results.

My guess, the IPO will do well. I have not seen the required SEC S1 filing, because it is not publicly available yet. I could change my mind when I read it, but my experience tells me companies do well more because of their fundamentals than the gnarly details you find buried in a government-required document.

What are those basics? A big market, a solid business model and strong leadership. I am not sure anything else matters. Except, the company must be good at sweating the small stuff and execute on every imaginable detail. A story is important but not enough.

Compass and its executives have come a long way in the last few years. Both have matured as Compass grew. The egos are tamed, the road map is clear and the promises are slowly coming to fruition.

Type a property address into Google and you will almost always see Zillow, Realtor.com and Redfin results at the top. But more and more, Compass is creeping into the real estate digital elite club — showing up in the top 5. Yes, Compass, the real estate broker. The listings are cleanly displayed, packed with data and competitive with other portals.

What you will not see are ads for agents who are not listing the property. 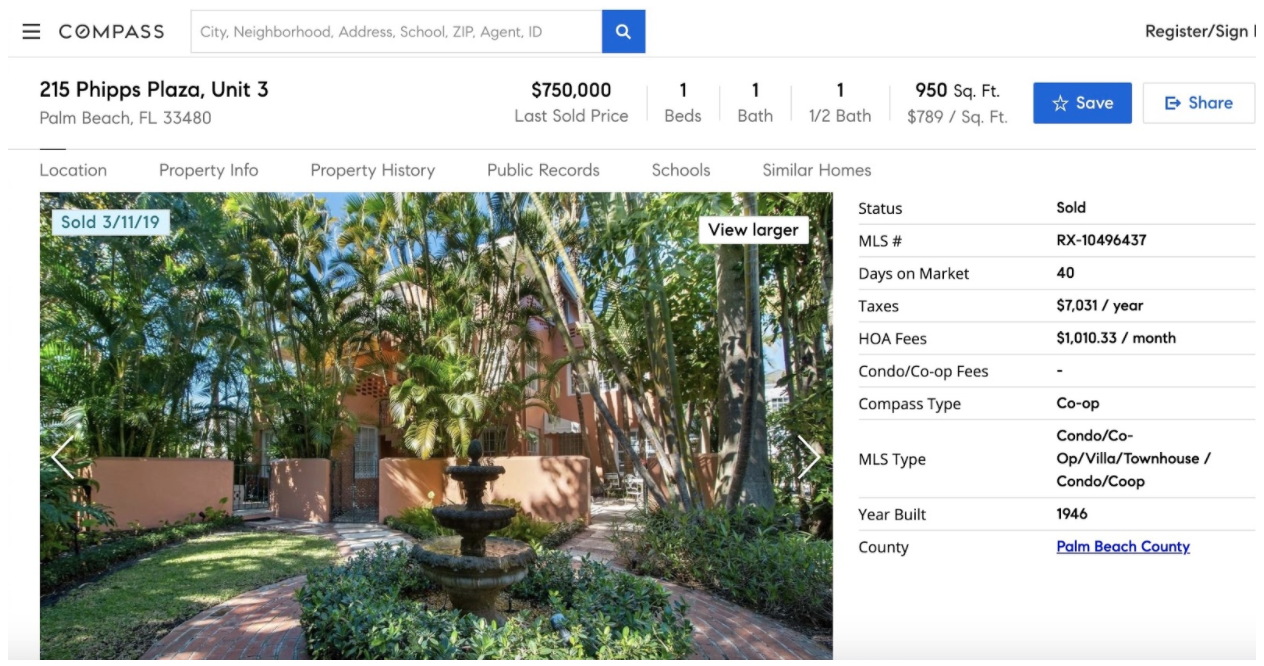 This is important for two reasons: the company puts its agents first and it is investing in the technology, in this case SEO. Blocking and tackling, yes, but necessary.

Search is not only symbolic of where you sit in the real estate pecking order, it also shows that Compass is building a digital consumer brand, adding to its industry brand and customer touchpoints with its vast agent network.

Every successful new company goes through phases of growth. Compass began by raising a pile of money to go hard at building market share. Back then, it was not doing much on technology and it left some operational issues unaddressed. The company spent its energy buying up brokerages and recruiting top producing agents for big bucks, when Realogy was down on its luck.

The company’s second chapter focused on keeping those agents happy, delivering on the technology promises and tightening up its operations. Compass never spouted ideas about blockchain, iBuying or agent robots. Instead, it emphasized agent branding, culture and light tech, but within the box of a 120-year-old business model.

With a pedigree education and bio including a stint in the White House, Compass CEO Robert Reffkin initially was an outspoken leader about his new adventure, promising to clean the clock of competing brokers. Showing maturity today, he has curbed his declarations — but not his enthusiasm.

A couple of years ago, the company slowed its expansion and focused inwardly to clean up its house.

The best thing that ever happened to Compass was the WeWorks blow-up. It taught every unicorn entrepreneur a lesson. Don’t lead with your ego, do not obfuscate on details with investors, do not be greedy and do not show off your success with lofty proclamations. Oh, and do not use investor money to buy a jet and smoke pot on the job.

As the WeWork story unravelled after it filed its SEC S1 to go public in 2019, Vision Fund founder Masayoshi Son, a Japanese billionaire technology entrepreneur, held a hush-hush meeting in Pasadena, California, at the tony Huntington Hotel for the companies that he had invested in. Reffkin was there. WeWorks founder Adam Newman was not — by then, he had morphed from being Son’s prodigal son to his current standing as a business buffoon.

At that gathering, founders learned that Son’s message had changed from Go Big or Go Home to something more like this: curb your ego, get profitable and shut your mouth. Reffkin was never one to blab too much, but the WeWork debacle had to be a turning point for him and his company.

Reffkin is a big risk taker but personally he is a trained listener. He is keen on asking questions when in a conversation, displaying humility and respect and disarming any confrontation. Yes, he is charismatic, but he pulls no punches — he is direct and ruthless enough to get things done. You don’t grab that level of market share unless you are crazy like a fox. When he tore at the heart of his competitors in his aggressive expansion, many brokers complained about unfair business practices and some sued Compass, including Realogy.

I have never witnessed any real estate leader take more guff and face more hostility than Reffkin. The number of smart people who predicted his demise is long. Oddly, he was even criticized for not doing anything original.

Envy played a part. “Why didn’t I get my billion, this is unfair?”

When ending interviews on the Connect stage, I often offer congratulations to any entrepreneur who has achieved success. I understand how difficult it is to raise money, how challenging it is to recruit talented people, grow a business, build a culture and find customers. And that’s even more true in an industry that is often self-righteous about how things should be done and ready to jab outsiders with a fork.

There are six million businesses in the United States that employ others. Of those, less than 10 percent are publicly traded.

It is hard just to sell one candle on eBay, and it is an even higher hurdle to generate enough revenue to afford a single employee. Then, increasing revenue enough to afford office space, provide employee benefits and hire more help. Then, convincing others to invest in your great idea may seem easy but it is not. Finally, persuading Wall Street that you are worthy to ring the opening bell in Times Square. That is the Super Bowl, make no mistake about it.

The Compass team is suited up. Game on.

The Compass IPO: Everything You Want To Know But Were Afraid To Ask