Participating in last week’s insurrection at the Capitol was not a violation of the National Association of Realtors’ new ethics policies unless a Realtor directed hate speech toward a protected class while doing so, according to the third of six monthly training webinars the 1.4 million-member trade group will be hosting in the wake of the changes.

In November, NAR’s board of directors passed controversial changes to its professional standards to crack down on racist and discriminatory speech and behavior.

The changes, which became effective immediately on Nov. 13, apply NAR’s Code of Ethics and Standards of Practice to all of a Realtor’s activities, not just those related to real estate; prohibit hate and harassing speech against protected classes; prohibit all discrimination, not just willful discrimination, against protected classes; and recommend that ethics violations be considered under membership qualification criteria.

One of the policies that was approved, Standard of Practice 10-5, reads as follows: “Realtors must not use harassing speech, hate speech, epithets, or slurs based on race, color, religion, sex, handicap, familial status, national origin, sexual orientation, or gender identity.”

A Realtor that violates the policy would be charged under Article 10 of the Code of Ethics, which prohibits denying equal professional services to anyone in those protected classes.

Political affiliation is not a protected class under the Realtor Code of Ethics. Matt Difanis, chair of NAR’s Professional Standards Committee, reiterated during the webinar that Standard of Practice 10-5 is not designed to sanction political beliefs or opinions.

Difanis has previously said that expressing support for a candidate by, say, displaying a bumper sticker is “nowhere near rising to the level of hate speech, epithets or slurs” directed at a protected class or a member of a protected class because of their membership in that protected class. Such a complaint would probably not make it past a grievance committee to a hearing, according to Difanis.

At Thursday’s webinar, Difanis clarified that the Realtor Code of Ethics in general is not designed to be a substitute for criminal codes at the local, state or federal level.

Earlier this week, NAR declined to say whether some acts could be both crimes and violations of the code and whether any Realtors who participated in the Capitol riot had violated any NAR rule, policy or the code of ethics. The trade group declined to rule out penalties for Realtors who attacked the Capitol, but also did not offer specifics.

“You do have absolutely Realtor members that have been identified as participants in the events at the U.S. Capitol last week,” Difanis told an audience of some 3,000 registered attendees.

“There’s a whole investigative process on the criminal side that has to go on to determine was the person posing [in photos] actually somebody who unlawfully accessed restricted areas, and so on and so forth.”

However, while a Realtor could have violated Standard of Practice 10-5 in the course of those events, most of what has surfaced so far weren’t violations, according to Difanis.

“Being there, having a Trump flag, none of that stuff is a 10-5 issue,” Difanis said. However, he said if there was “video or photographic evidence” of someone determined to be a Realtor “spray painting racial slurs on the walls of the Capitol” or wearing “anti-Semitic images in clothing,” that could be a violation.

“But merely being a participant in something that appears likely to involve criminal activity does not automatically invoke 10-5,” he said. 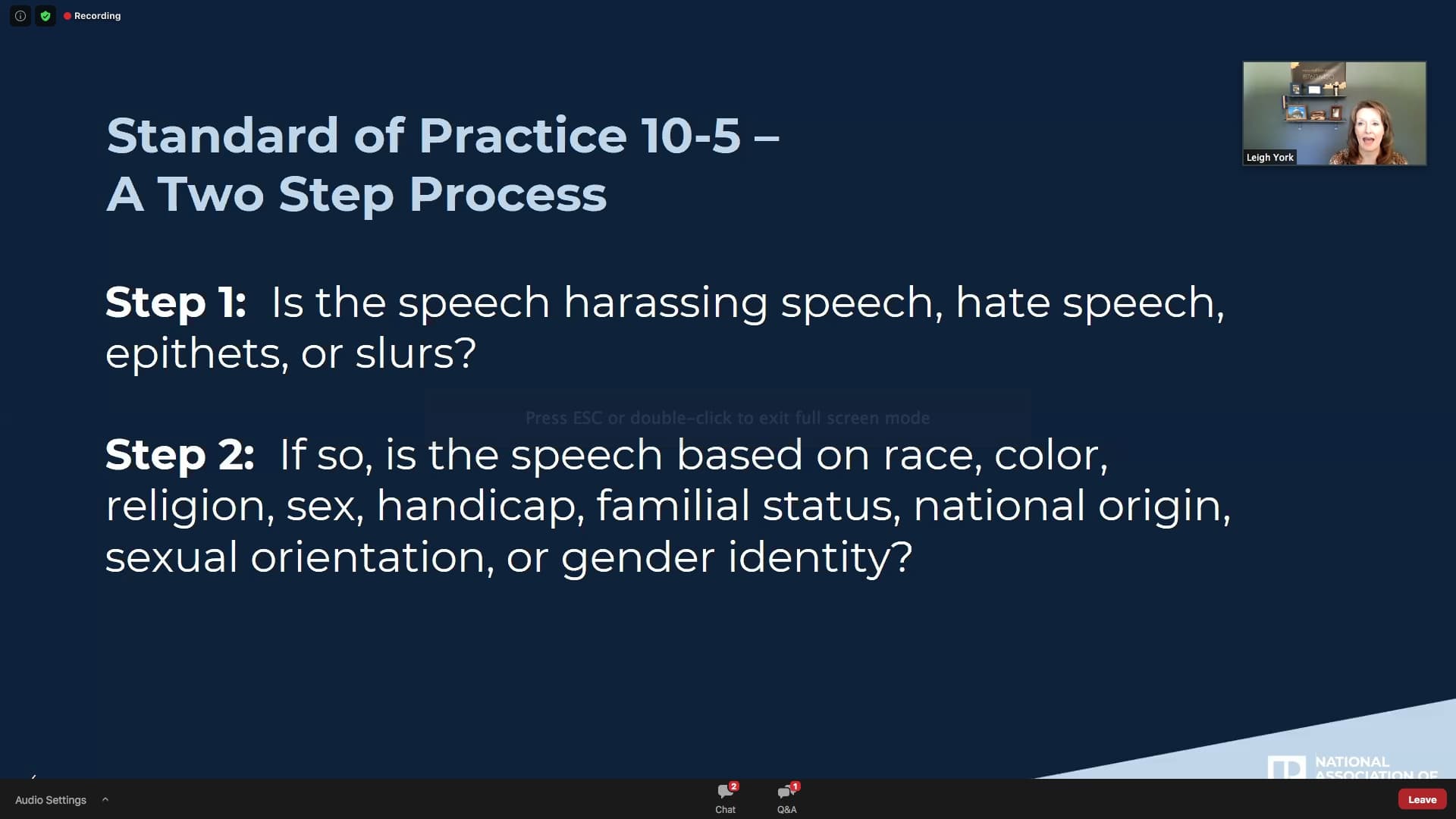 Difanis added that, contrary to what an industry commenter has said, the assault on the Capitol is not the first real “test” of the ethics changes.

“No, for the most part it won’t be,” Difanis said. “Those are separate. Don’t let emotion cloud the objective analysis of the code of ethics, which is what pro standards volunteers already know how to do.”

Fellow committee member Bruce Aydt, who is also an attorney, said that if the issue does not involve harassing speech, hate speech, epithets or slurs about a protected class, it doesn’t fall under the new policy.

“[Being present] in Washington D.C. last week, that’s no violation of Standard of Practice 10-5,” Aydt said. “It can, as Matt said, escalate to that. It can morph or change to it. But political statements one way or the other, attendance at an event, one way or the other, if you go further into criminal activity, as some of the evidence may show, that’s not within the code of ethics as well, though it’s a violation of outside laws.

“So really work hard if you have any complaint like this to separate the two. What’s the issue in the code? It’s harassing speech, hate speech, epithets and slurs based upon the protected classes.”